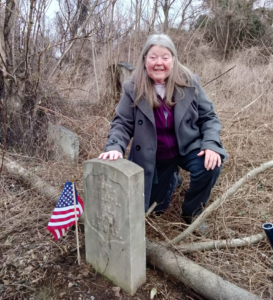 AS LANSDALE celebrates its Sesquicentennial, it is fitting that the grave of the man for whom the town is named, Philip Lansdale Fox, has finally been uncovered. Lansdale owes its existence to the coming of the North Pennsylvania Railroad in 1856. A few years prior to this, railroad surveyor Philip Lansdale Fox searched for a location to put a junction – where one line would continue on to Doylestown and the other would split off to Bethlehem.

He came to a sparsely inhabited area a few miles from North Wales and determined that this would be the right place. The middle name of the surveyor was chosen as the name of the new junction. Lansdale grew rapidly as the trains came through regularly, and was finally incorporated in 1872.

IN 2015, Lansdale Historical Society board member Linda Evans began looking into the life of Philip Lansdale Fox, as little was known about him. 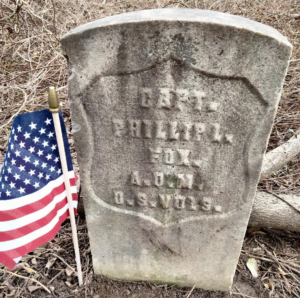 “Bit by bit, I began to uncover pieces of his story,” Evans said. One of the first pieces of information she discovered was a transcription of his death certificate. Fox died in Philadelphia in 1895 at the age of 78 and was buried in the city’s Mt. Vernon Cemetery.

The cemetery, located at Ridge and Lehigh Aves., has been in existence since 1856. Although smaller in size, it was comparable to Laurel Hill Cemetery, located across the street, with many large and beautiful monuments. Several members of the Drew and Barrymore families rest here.

Somehow, over many years, the cemetery came into one man’s ownership. As he was aging and living out of state, it became increasingly difficult to get permission to enter the locked cemetery.  As the result of a lack of grounds maintenance, most of the gravestones and monuments were covered with layers of thick brush.

Through phone calls to the owner, Evans was able to obtain the location of the grave, including the fact that Fox was buried alone and was issued a military headstone for his service in the Civil War. However, she was never permitted to enter the cemetery

“I was despairing of ever being able to get in,” she said “I even pursued Fox’s descendants to enlist their help.”

WITH THE SUPPORT of the Lansdale Historical Society, Evans and two other board members, Pat Rieker and Ruth Madison, took a trip to Mt. Vernon three years ago, but were only able to walk along the perimeter fence and peer into the overgrown lot. 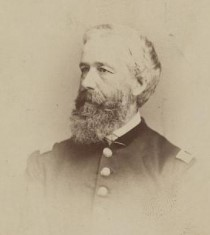 More recently, a group of people in Philadelphia were able to go through the courts and form a conservatorship to take control of the cemetery. The Mount Vernon Cemetery Conservation Company Inc. was formed. Since last fall, slowly but surely, the incredible overgrowth of trees, bushes, and vines is being stripped away. Last Saturday an open house was announced to allow access to potential volunteers and interested parties.

“My husband Joe and I emailed our intention to visit,”, Evans said. “Several of the people in charge knew of our search. When we got there, a tour on the main path around the cemetery showed areas of clearing, but many sections are still in dire need of attention.

“Fortunately, the section where Fox’s grave is located had been cleared enough that my hopes were high. We were assured that the grave of Philip Lansdale Fox could be found. I was hopeful that the stone would still be there, upright and legible,” she said.
“After a few minutes of crawling around in the underbrush, someone shouted that they had found him. As two men cleared the area around the stone, it was evident that the final resting place of Philip Lansdale Fox had been found.”

The Mt. Vernon Cemetery Conservation Company Inc. is in need of funds and volunteers to continue their work to restore the cemetery. For more information: www.mountvernoncemetery.org/